With the release of Xiamen: The Camphor City Guide, there simply wasn’t enough room to include all of the photos of the city that I wanted readers to see. So here, with captions, are a selection of images that I hope will give even more colour and context to the words in the guide.

The view from Xiamen Botanical Gardens, over Wanshilian Temple and the towers lining Yundang Lake, to the green hilltop of Huweishan Park in the distance 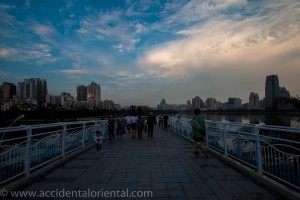 The bridge that carries the visitor from Haiwan Park to Yundang Lake. The Marco Polo area is on the left

A trio of egrets swoop for fish on Yundang Lake

Flowers near the children’s playground in Haiwan Park

Viewed from Sunlight Rock, the iconic roof of Kulangsu’s Organ Museum is backed by the western shoreline of Xiamen island, including the Xiamen Bund now known as Waterfront Park

The moon rises over Xiamen’s newest skyscrapers, the Shimao Xiamen Straits Plaza as they take shape, with the red roofs of Kulangsu in the foreground 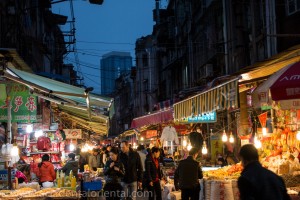 Night falls on Bashi Market near Zhongshan Road, some of Xiamen’s oldest streets

Fresh ale, brewed on site at Amoy Bräu in the Shapowei area

Nanputuo Temple, dwarfed by the towering Wulao Peak to the north 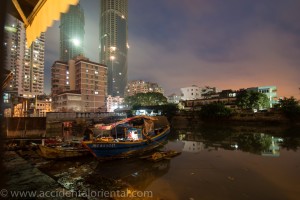 Sampans bottom out on Shapowei inlet, with the towers of Shimao Xiamen Straits Plaza behind

Monks assemble on the outer edges of Nanputuo’s main temple 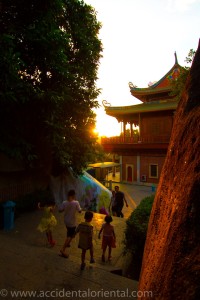 Sunset among the rocks and halls of Nanputuo Temple

Seafood on offer in Zengcuo’an

A typical hole-in-the-wall Zengcuo’an business, with its lovingly-painted mural on the outer wall