In the last couple of decades, the popular image of China, at least outside China itself, has become a very modern one. Much in the same way that Japan’s rapid modernisation subsumed an ancient “shoguns and ninjas” image and replaced it with a hi-tech, futuristic one of robots and intelligent lavatories, China’s recent boom has brought some rather more unsightly stereotypes to the fore – smog, factories and endless apartment block developments among them. When we visit the big-ticket tourist cities, Beijing, Shanghai and Xi’an, we often see one or all of these, but we do it for some small and carefully-preserved piece of China’s history – Old Shanghai, the Imperial Palace Museum, or the Terracotta Army. After those fascinating exhibits, the cities around them feel like a strange mix of luxury stores, grey cookie-cutter apartment blocks and ultra-modern, ambitious and sometimes ridiculous new construction. In the People’s Republic’s rush to create a communist utopia, and the resulting u-turn and plunge into a market economy, Chinese life has changed, seemingly completely. So, one begins to wonder, where is a living version of old China? One that pre-dates the Cultural Revolution and isn’t cluttered with tourist shops and ticket booths? One answer to that question is a little town in remote Shanxi province, called Pingyao. 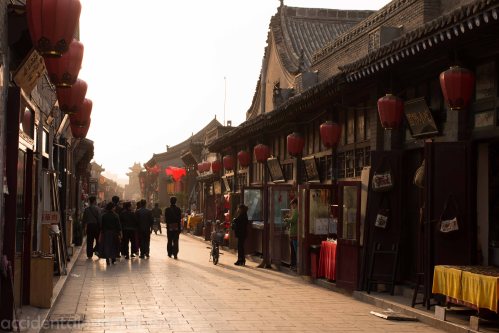 One of Pingyao’s shopping streets

Pingyao has a long history. Situated roughly halfway between Beijing and Xi’an, it has been in the company of the centres of Chinese civilisation for over 2000 years, and held a position at the eastern end of the trans-continental Silk Route. But it was more recently, during the last throes of the Qing dynasty, that the city amassed much of its riches. It was in Pingyao in 1823, as wealth in the form of silver moved across the vast empire to finance development and occupations, that China’s first bank emerged. Business boomed and Pingyao spawned several banks, with branches across the empire and as far away as India. It all went well until the fall of the Qing in 1911, by which time the wealthy banking families of the city had built impressive homes and amassed enviable art collections. The 20th century was unkind to Pingyao as the business centres shifted to the coast, industries were nationalised, and Shanxi’s national role was reduced to the extraction of coking coal. The upshot of Pingyao’s descent to the fringes, however, seems to have been its protection from modern China’s relentless development and the preservation of the city’s precious heritage. 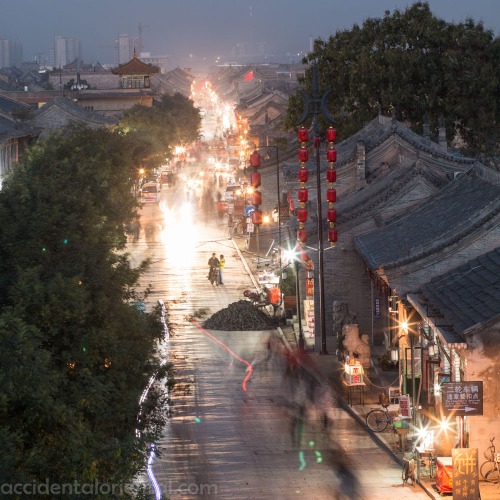 Pingyao has been surrounded by a city wall for over 2000 years, but the wall in its current form has been in place since the Ming dynasty in the 14th century. Its 6km length encloses and overlooks a criss-cross of tiny lanes, marshalled by 2 perpendicular main arteries. The southern half of the north-south artery, South Street (Nán Dà Jiē), is the most heavily-touristed, straddled by an ornate gate and lined with shops selling tourist nicknacks, eclectic collections of antiques, and restaurants and cafes. South Street also finds itself among the bulk of the tourist attractions and guest houses in the city, heavily trod by large Chinese tour groups and a smaller crowd of foreigners. There are two temples and four bank museums in the southern half of the city, as well as two double-entendred “escort agency” museums. Some of the attractions date from over a millennium ago, and each reveals a precious piece of China’s history, chief among them the pioneering Rishengchang Draft Bank Museum, with a room full of treasures dating back to the Song Dynasty. The Rishengchang Museum is part of a city-wide entry ticket of 120RMB that includes a number of attractions and is valid for three days. But the beauty of Pingyao is not only in the draft banks and temples, but also in walking its sometimes-restored, sometimes-rubble-strewn dead straight lanes.

Turning off the main streets, the touristic nature of the lanes quickly dwindles, but the ancient village architecture never does. Dark brick façades rise either side of you and the sky forms a thin strip over your head, the horizon in front obstructed by an ornate gate in the near distance, or one of the watchtowers on the city wall. The occasional electric bike creeps up behind and rushes silently past, while elderly locals rest outside their houses, watching Pingyao life go by. At night the lanes are strung up with red lanterns to light the way – until they’re not, and the path is pitch black, haunting bike lights in the distance mixing with the faint smell of heating coal and the cool night air to give an otherworldly feeling to your evening stroll. The outskirts are dotted with construction as new buildings are being built with similar materials in a similar manner to the old, and it’s sometimes difficult to tell the difference between ancient and new. But there are a number of hotels and guest houses, such as the Yide Hotel in the city’s western half, set in courtyard complexes from the city’s golden era, whose success will likely be the guarantee of the preservation of much of the city’s wonderful heritage. And the city wall itself can be walked the entire perimeter, as part of the city-wide entry ticket, offering a rooftop perspective over an ancient Chinese city, still living, and finding its place in the new China without wholesale demolition and high-rise construction.

A small lane in Pingyao at night

In the headlong rush to enrich a nation of 1.5bn and reach economic superpower status, heritage has been the least of China’s worries. But now that large numbers of Chinese are beginning to travel, and faraway parts of the country are accessible with airports and fast trains, it’s likely they will want to see what’s left of their precious ancient heritage preserved, that now they can afford not bulldoze the old and replace it with something new, but find the value in what’s there. We outside China can help too, by seeking out the genuine “old China”, by looking further afield than the big cities and digging deeper into a country that’s so much more than just smog, factories and high-rise glass-and-steel.