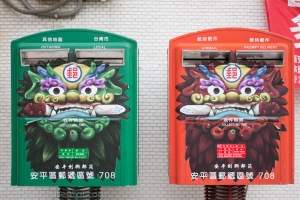 Taiwan’s position in the world is a difficult one for a visitor to reconcile. Once upon a time recognised as the free and open repository for all of Chinese history and culture in the face of the PRC’s cultural scorched earth policy on the mainland, the 1970s saw that recognition fade, with this complex and diverse island gaining a kind of utilitarian workshop image. In the 1980s “Made in Taiwan” was far more common than “Made in China”. But it doesn’t pay to lament the loss of Taiwan’s “Free China” image too much, as this over-simplification doesn’t do justice to the island’s true Chinese and non-Chinese past: Austronesian indigenous people are the longest continuous residents of Taiwan, the most recent influx were indeed post-war political refugees from right across the mainland Chinese territories, and the relatively short reign of the Japanese in the early 1900s left a significant mark on the island’s architecture. But the dominant Chinese culture in Taiwan is and always has been, since the first Chinese and European contact with the island, a Fujianese one. This is no more true than in the southern village of Anping, the island’s first Chinese capital.

Walls and a window in Anping’s old streets

Anping is the site of a 17th century event dear to the hearts of all Chinese – the defeat of the Dutch East India Company (VOC) at their Fort Zeelandia base in southern Taiwan by the Fujianese forces of one Zheng Chenggong (or Koxinga), a man upon whose legendary status even the Japanese can agree. It marked the first Chinese victory over a European power, and the first time Taiwan could be considered Chinese. But the fort and even Taiwan itself were not the real object of Zheng’s desires – the victory and subsequent founding of Anping was meant to be but one step in the re-taking of China itself back from the Manchurian Qing, who had conquered all of the mainland except for a pocket of southern Fujian that included Xiamen and Jinmen islands. Ultimately, the Qing prevailed, but not before Anping in Taiwan and that pocket of southern Fujian had formed a brief but fruitful marriage that continued in one way or another throughout the 300+ year reign of the Qing dynasty. 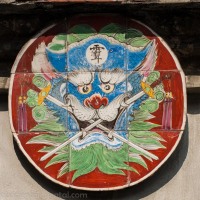 So there’s a Fujianese solidarity that drips from Old Anping’s walls and spills onto her criss-cross of narrow lanes. It’s shaded by overgrown red brick and grey stone, stoops through six foot high doorways flanked by vertical painted words and inside it’s greeted by a softly-lit ancestral shrine. They built villages across the seas, these refugees, so that once you fall into their warren of streets, you’re transported back to Fujian. Their mansions in miniature and the claustrophobic arteries that carry the visitor have survived poverty, disaster, dynasties and civil war – not because they didn’t get destroyed, but because they kept getting built. These days they’re no longer being built, but they are being restored, to a wonderful standard in Old Anping, and belatedly in parts of the PRC like the Zengcuo’an area of Xiamen. And even in Tainan, the 20th century city that Anping now forms a part of, the residents still walk a warren of streets, and at night you can still spot in the front rooms of the relatively modern accommodations, through the glass, a traditional family shrine cast in dim red light. 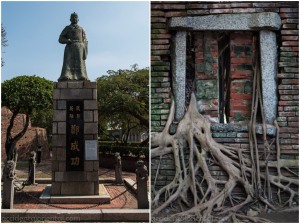 The Zheng Chenggong statue at Fort Zeelandia, and just one of the windows of the Anping Tree House – a former warehouse for the British merchants Tait & Co that has been overcome by banyan trees

But it’s Old Anping that has preserved her history so delightfully – antique painted ceramic ‘sword lions’ hang over the doors to protect those inside, and they adorn public signs and the municipal letterboxes around the town. Deep in the old town is Haishan Hostel – a base where Qing troops from Fujian were stationed during the three centuries of Taiwan’s rule by Beijing. High on a hill, the site of the old Dutch Fort Zeelandia remains and much has been reconstructed to give a feeling of what was once there. An unassuming overgrown brick wall is the oldest preserved part of the complex that includes a new watchtower that was swarming with schoolchildren the very same day that I had Anping’s old streets, a stone’s throw away, nearly completely to myself. The crowds were also in number at the nearby Anping Tree House, a disused British merchants’ warehouse that was neglected for so long that it sprouted a forest of banyans inside and out, becoming a strange attraction all its own, while the old Fujianese streets nearby remained sleepy. European colonial history is interesting, for sure, but in Anping it really is trumped by the Chinese world that grew up around and after it.

The re-built watchtower at Fort Zeelandia, and the oldest remaining wall in the fort

The Taiwanese often look to Tainan and Anping in their south as the repository for their own history – not Chinese history, but Taiwanese history – the very particular experience of an island in the Pacific settled by Fujianese migrants in search of a better life. Unburdened by the grand designs of a nationalist government lamenting communist cultural annihilation on the mainland, they succeed in capturing the Chinese home-away-from-home feeling much better than their shiny new northern capital Taipei. And if Taiwan is to continue forging its own identity outside of China, Anping will continue to keep and protect much of what they hold dear. 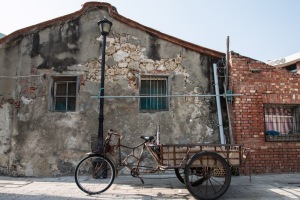