Most flights pass by with little incident, each one predictable, indistinguishable from the next. My flight from Guangzhou to Ürümqi in Xinjiang was not one of those.

The first thing that struck me was protruding from the seat pocket in front of me – on the pamphlet of safety instructions, the usual Chinese and English characters were joined by the Arabic script. Xinjiang is the only part of China where Arabic is used, for the Uyghur language, spoken by more than 40% of the province.

This was the first time I thought I’d noticed an air marshall on a plane. Tall, with close-cropped hair and a deep crease bisecting the back of his head, the man one row in front would periodically strut the cabin and un-selfconsciously eye the passengers with a mixture of boredom and suspicion. I knew what he was for sure when he abruptly ordered the cabin crew to tell me to turn off my “shou ji”, my mobile phone. They and I fell into line without reply.

About 2 hours into the 5 hour flight, looking out the window offered a birds-eye view of a moonscape. Parallel to the plane ran a spine of desolate brown crags, their tops scattered in the summer with snowdrift. Perpendicular to these peaks, long winding ridges of rock fell away, twisting into the distance like the backs of giant alligators. They dwindled to shallow bumps and eventually into dark ripples of sand dunes. As far as the eye could see, there was no sign of life; no road, no river, no farm, no village. Desolate China; her own big, broad Badlands. 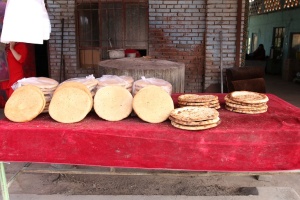 Naan bread for sale in the streets of Turpan, near Urumqi

Before our descent, an African man with a francophone accent, dressed in jeans and t shirt and wearing a silver crucifix, sat next to me briefly. He told me was on his way back to Kyrgyzstan, having missed his transit to the Philippines in Guangzhou. It seemed an unlikely story, so I politely declined his request for help, assuming he’d manage okay.

The long approach to Urumqi Airport passed over a flat expanse of bland urbanisation, dominated by an ugly, orderly collection of asbestos blue warehouse roofs. At some distance, through the industrial haze shone the snowcapped Tianshan, the “Heavenly Mountains” of Central Asia, which Xinjiang shares with Kazakhstan and Kyrgyzstan.

As we disembarked, we passed the air marshall in the jetway where he was placing the African man in handcuffs. Behind them in the west set a toxic orange sun. Less than an hour later I would be ordering lamb kebab and ayran after iftar in a bustling Uyghur cafe across from my hotel – a late night snack and a welcome to Xinjiang fittingly following such a peculiar flight.